The Flash: Teddy Sears On Zoom’s Past

Spoilers For The Flash Ahead…

When The Flash returns on Tuesday 19 April at 8pm EST on The CW with the episode titled “Versus Zoom,” we will finally learn more about the man behind Zoom, Hunter Zolomon (Teddy Sears) and his tragic past, following that shocking reveal.

EW recently interviewed Teddy Sears to find out more about Zolomon and funnily enough he reveals that Hunter and Barry had a very similar background. “What’s really exciting about going and looking at Hunter Zolomon’s origin story is that it very closely mirrors the Barry Allen origin story. We’re going to see what happened to Hunter as a child look almost exactly like what happened to Barry when he was a child. One man went one way and one man went the other.” 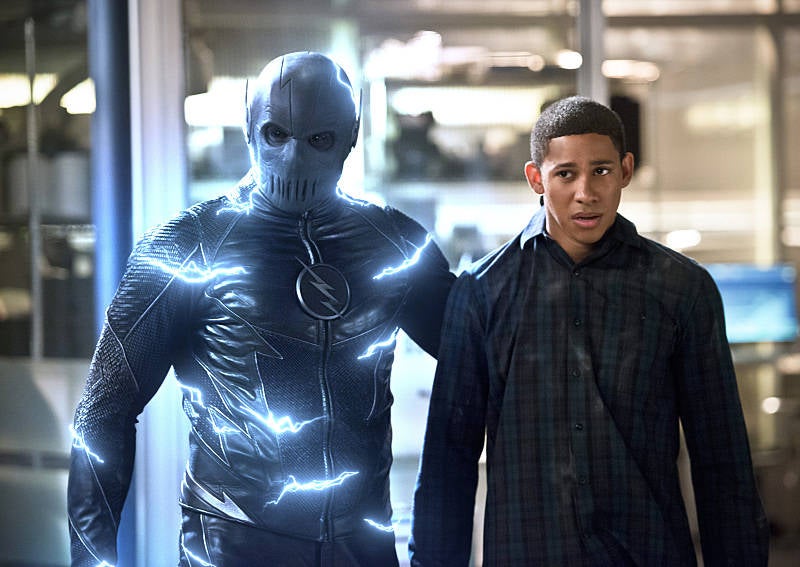 In the promo for “Versus Zoom” Wells very bluntly reveals Zolomon was a convicted serial killer, just how much of a sociopath is this character?! “He’s 100 percent sociopathic, 100 percent obsessed, very much a megalomaniac, someone who is obsessed with his own power. However, there was a really wonderful scene that I did with Grant where that opportunity for the audience to experience an understanding or a pathos for Hunter exists — at least that’s what we were attempting.”

Sears also confirms we will find out just who the person in the iron mask is in the season finale, “we reveal it in the finale — I had no clue last week. I didn’t know who the guy was. I didn’t even have a clue. Well, of course, now I know because we’re shooting the finale and we’ll get to that stuff next week. All has been revealed to me. I don’t even know what to say because it’s such a fun thing to me being nice and vague and untouched. I can promise that it will be revealed and it will be quite satisfying.”

BARRY IS READY TO FACE ZOOM; HUNTER ZOLOMAN’S STORY IS REVEALED – Equipped with the tachyon device, Barry (Grant Gustin) believes he is fast enough to stop Zoom (guest star Teddy Sears) and wants to open the breaches to catch him. Harry (Tom Cavanagh) strongly advises against that plan but after Barry convinces him, Harry reveals that Cisco (Carlos Valdes) has the power to re-open the breach. Meanwhile, Hunter Zoloman’s (Teddy Sears) painful story on Earth-2 is revealed.

“Versus Zoom” airs Tuesday, April 19 on The CW.