So in Supergirl we know Kara is technically older than her cousin in the show, but due to her spacecraft being knocked off course from Earth and ending up in the Phantom Zone for 24 years, by the time 13 year old Kara landed on Earth, Kal-El had already become Superman. So when it was announced a young Kal-El was going to appear in the show, I did wonder how they were going to pull that one off! But in the end of the previous episode we got a big hint with the parasitic plant Black Mercy clinging to Kara’s ceiling…

CBS have released some first look images for next weeks episode, titled “The Girl Who Has Everything”, a take on the classic Alan Moore and Dave Gibbons Superman comic book storyline “For The Man Who Has Everything”. Check out the picture of young Kal-El (Daniel DiMaggio) below. 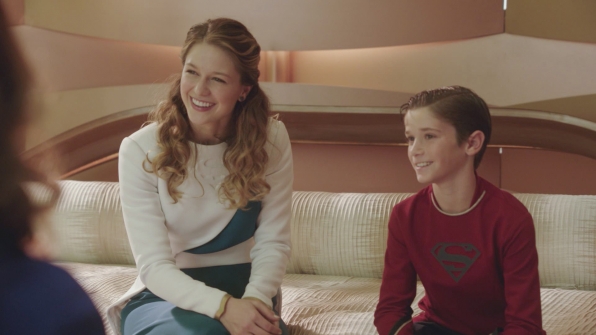 “There was something about that particular story that, to me, was almost even more resonant for her,” executive producer Andrew Kreisberg told EW in a recent interview. “For Superman, when it happens to him, it’s his wish for something that he never had. But for her, she wants something back that was taken from her. It really is like her stepping into this fantasy of what life would’ve been like if she had never left Krypton and had grown up there, if her parents were still alive, if she had grown into the person and the life that she wanted to lead.”

Kara’s friends must find a way to save her life when a parasitic alien attaches itself to her and traps her in a dream world where her family is alive and her home planet was never destroyed.

“The Girl Who Has Everything” airs in the US February 15 on CBS.