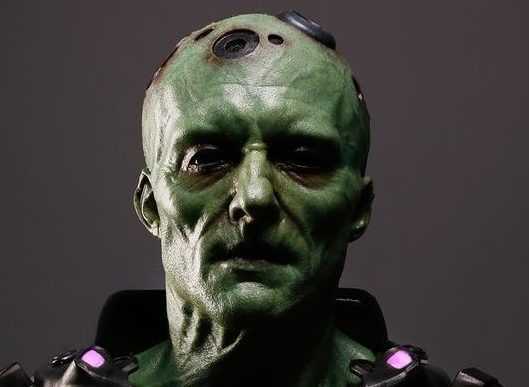 SYFY has released a brand new trailer for the upcoming Superman prequel Krypton which gives us our first look at one of the most classic Superman villains – Brainiac!

Check out the trailer and first look picture below.

Brainiac is played by Blake Ritson in the prequel, who has previously been on bad guy duties in Da Vinci’s Demons. Ritson recently spoke to USA today and said about his character and that iconic ship: “Yes, he traverses the universe in a gigantic skull ship, ripping cities out of planets, miniaturizing them and placing them on board. But he does so in the spirit of conservation. In his mind, he’s committed to the ultimate philanthropic act: saving all of creation. In many ways it’s analogous to Noah plucking out two of every animal to ensure their survival, even while knowing that others must perish.”

Talking about his character’s make-up, Ritson commented: It’s chillingly effective,” he adds. “The first week I turned a corner and one of the cast (members) who hadn’t seen the makeup before screamed. A few days later, one of the crew dropped their lunch when they saw me for the first time. Then I knew that we were really on the right track.”