With the second series of Daredevil just around the corner, reports about performances in the upcoming series are steadily emerging, in particular Jon Bernthal’s take on The Punisher. Bernthal’s performance has impressed Marvel TV Executive Vice President Jeph Loeb so much he told ComicBook.com “Jon Bernthal has succeeded in his quest, his Punisher is extraordinarily memorable, in every way.” TVLine reports that his performance has been so well received by executives that The Punisher could get his own spin-off series as part of the MarvelTV & Netflix collaboration. The Walking Dead star has broken his silence on playing the role of Frank Castle aka The Punisher in a recent interview with EW.

What drew you to this part?
JON BERNTHAL: I was a big fan of the first season. I love the way the first season attacks the comic world and it did it with authenticity. And obviously this is a character that’s resonated for a long time. It’s an important character, it’s one I’m honored to play. This is a guy who means a lot to a lot of people and his character has resonate with law enforcement and military. People have been coming up to me on the streets of New York saying, “Do not mess this up.”

How do you see Frank Castle?
As a man who put his on the line and really went through the ultimate sacrifice for this country in his involvement in the military. He’s a guy who brought the war home with him [in] the worst possible way. There are a lot of iterations of this character and in all of them it’s a man who’s gone through this unbelievable trauma and what’s interesting about our take on him is how this trauma reshapes his own philosophy. I can’t give too much away, but what’s interesting is the way [showrunners Doug Petrie and Marco Ramirez] have made his story a slow burn. It’s interesting to find this guy at the point we find him. You want an evolution and a process. He starts in one place and will end up in another.

What were some of the choices you made as an actor to bring him to life?
The training and physicality is extremely important in whatever I do. Luckily I know guys in the military branch he was in. I trained with them and trained a lot with weapons. But with Frank, what was important was the emptiness inside him. He’s dealing with this unbelievable loss. There’s unbelievable anger and hatred and shame. There’s a sense of responsibility and as a father and husband, if I were to lose my family on my watch … I had to put myself in as dark of place as possible the last six months.

What toll did that take?
Especially at the beginning, what was powerful was a lot of isolation. The first few months I was taking long walks across the Brooklyn Bridge to the set, trying to shed any outside influence of joy. Whether it’s successful or not remains to be seen.

It’s a very physical role, what’s the most challenging thing about that?
This stunt team, what they’re accomplishing puts them on a level nobody can compare to, in movies or television. They’re putting movie-quality fights — not just the intricacies and physicality, but there’s an emotional story behind every fight. What they’re doing in an eight-day schedule and we do in one episode, in a film you’d be rehearsing that for months. What they accomplish is staggering. I love physicality, I love fighting, I think the way a character fights and deals with adversity and danger tells huge amounts about the character. As this character develops into what he becomes, he becomes more violent and more raw.

I’ve seen the first two episodes. You’re going to have a lot of viewers rooting for you to kill these people. How do you feel about that?
One of the things I’m most excited for is I’m hoping the audience will go back and forth. There are things you can identify with and get behind,and there are things when the character pushes it and you can’t get behind him anymore. And that’s what I want. I think that’s the nature of the character. This is a guy who pushes the envelope. He’s brutal, but he’s coming from a place of unbelievable hurt. And the best thing about the character is he just doesn’t care. It’s a highly personal mission he’s on and if he offends you, it’s completely unimportant to him. 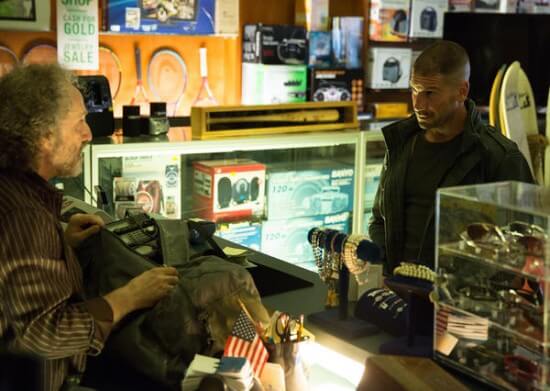 Superheroes tend to not have guns, your guy uses a gun. When you’re debating with Daredevil, are you thinking your character is right, or do you think he’s kinda messed up?
My job is to root this guy and get into his backstory and be an advocate for this character 100 percent of the time and believe in what I’m doing. And it’s really important that what I do and what I say might not be a characters’s true feeling.

You said the character evolves in the first season, can you give us some sense of that?
Obviously secrecy is key to Marvel. I can tell you that this guy, horrible tragic things happen, and we will see how he goes through that. The effect the other characters have on him will push him certain directions. I think once you see these characters collide, it’s tremendously interesting and emotionally gripping as well. It’s going to be a special season. If you thought last season of Daredevil was dark, we’re going to a whole new place.

Are you still watching The Walking Dead?
Those guys are and always will be family to me. I’m always rooting for them and behind them. But I’ve had an extremely busy year and really behind a little behind. One of the great things about finally wrapping [Daredevil] is I get to spend time with my family and catch up on The Walking Dead.