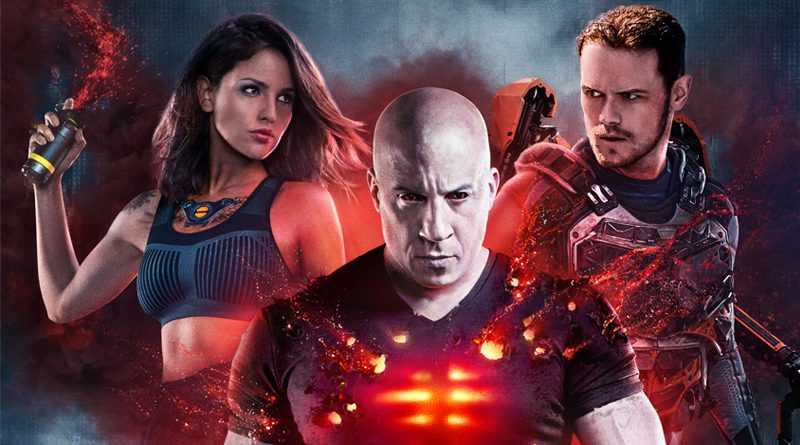 Despite what they are saying about the virus, I was desperate to get out to see Bloodshot. Based on the series from Valiant comics, I was excited to see this movie as a super hero film that isn’t from marvel or DC seemed intriguing and hopefully a breath of fresh air.I t’s a pity though that I watched the trailer, as once again I feel that it spoiled way too much of the film. Why do they do this? Can’t anyone out there with any kind of influence please start a campaign to stop trailers from spoiling films?

Anyway, onto the review. Bloodshot is directed by David S F Wilson, stars Vin Diesel, Eiza Gonzalez, Sam Heugan and Guy Pearce and has a story from Jeff Wadlow. We start with Vin as marine Ray Garrison returning from a mission that has deadly repercussions for him upon his return to his wife and civvy life. He is resurrected in a secret lab full of nanites and hi-tech equipment, minus his memories but enhanced with incredible new power. When he starts to uncover his past, he is gripped by a lust for revenge that leads him down a rabbit hole where nothing is what It seems.

Bloodshot is a strange hybrid of a movie. It of course follows the beats of what we now recognise as a superhero origin movie. We are introduced to the characters, we see their tragic backstory and their discovery of their powers, then we get to a third act confrontation that sets them on their path. However their is a strange retro feel to Bloodshot that seems to owe more to classic 80s and 90s action adventures than comic book lore. As the film unfolds , it conjures up memories of Robocop, The Matrix and Commando, and it almost feels that the screenplay embraced the tropes those films made real.

There are a lot of action set pieces and over the top characters, and although many may say the script is stilted, I almost get the feeling that this might have been the plan. There are a few nice twists that you may, or may not see coming, but despite a slight dip in the third act, things hurtle along at a nice pace, and overall the effects and action is well presented. In true superhero movie style, there is an over CGI’d final battle, and you can see that the modest budget may have been at breaking point here, but if you can overlook the obvious then there is a lot to enjoy here.

The film does feel like a throwback, but it does provide an enjoyable experience for fans of this genre. I get the feeling that there may have been some cuts made to get the film to a 12A rating, as there is a lot of violence on display, but it’s done without the gore that you might expect. The film though is not without faults, and the most glaring of all comes in a confrontation that purports to be in London. How this slipped by the production team escapes me, as there is absolutely no way that this scene was filmed in England. Nothing in the scene resembles anything in London, the streets are all wrong, the police car looks like a pick up truck and they couldn’t even get the number plates right. How this made the final cut escapes me, and again I can only blame the budget, that seems to be around the $45 million mark.

Apart from this, Bloodshot is a brave attempt to launch a new superhero universe that shows promise. It is not as polished or nuanced as Marvel, and lacks the legacy of DC, but there will be an audience for this movie out there.If you have any interest in superheroes, you need to go and support this, personally I enjoyed it so it’s a recommend from me.sadly it’s take at the box office may be hindered by the Corona Virus, which is very unlucky as it deserves better.

Louie Fecou has 149 posts and counting. See all posts by Louie Fecou